I have a new product for sale in the sadlucy shop!  They are made from etched brass and then I painted them black.  Why not buy some now! 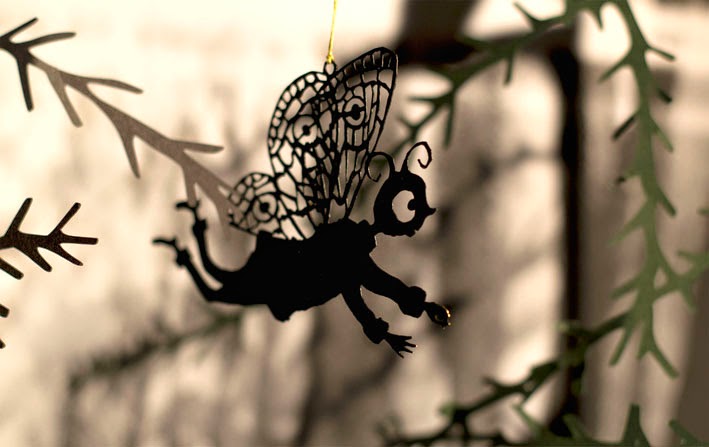 I forgot something - you'll just have to imagine it

I forgot something – you’ll just have to imagine it.  When the vicar does an arc onto the stage on his bike I thought it’d sound good to have a bike bell on the soundtrack.  I heard it once on a TV show with puppets, I can’t remember the name but I was the target audience.  They made a joke about Walter Raleigh and a bike bell rang. It’s my sort of humour and that little thing has stuck with me. I liked the sound.  Anyway - I forgot to do it so you’ll just have to imagine it.  I reckon it’s good to leave a few things not done.  It means you can get going onto the next thing before the paint dries and you can still smell the fumes. Ugh, I was thinking about the varnish I didn’t want to use but had to.  It ate the surface off my work and for the first time in the while project I felt sick – because I should have said “no” one more time than I did.  I needed an adult to help me.  Belinda couldn’t comment but her eyes twinkled for me and I got the message and felt better and went home.  Where was I?  Eat more salad and go easy on the coffee.
Posted by Unknown at 11:39 No comments: 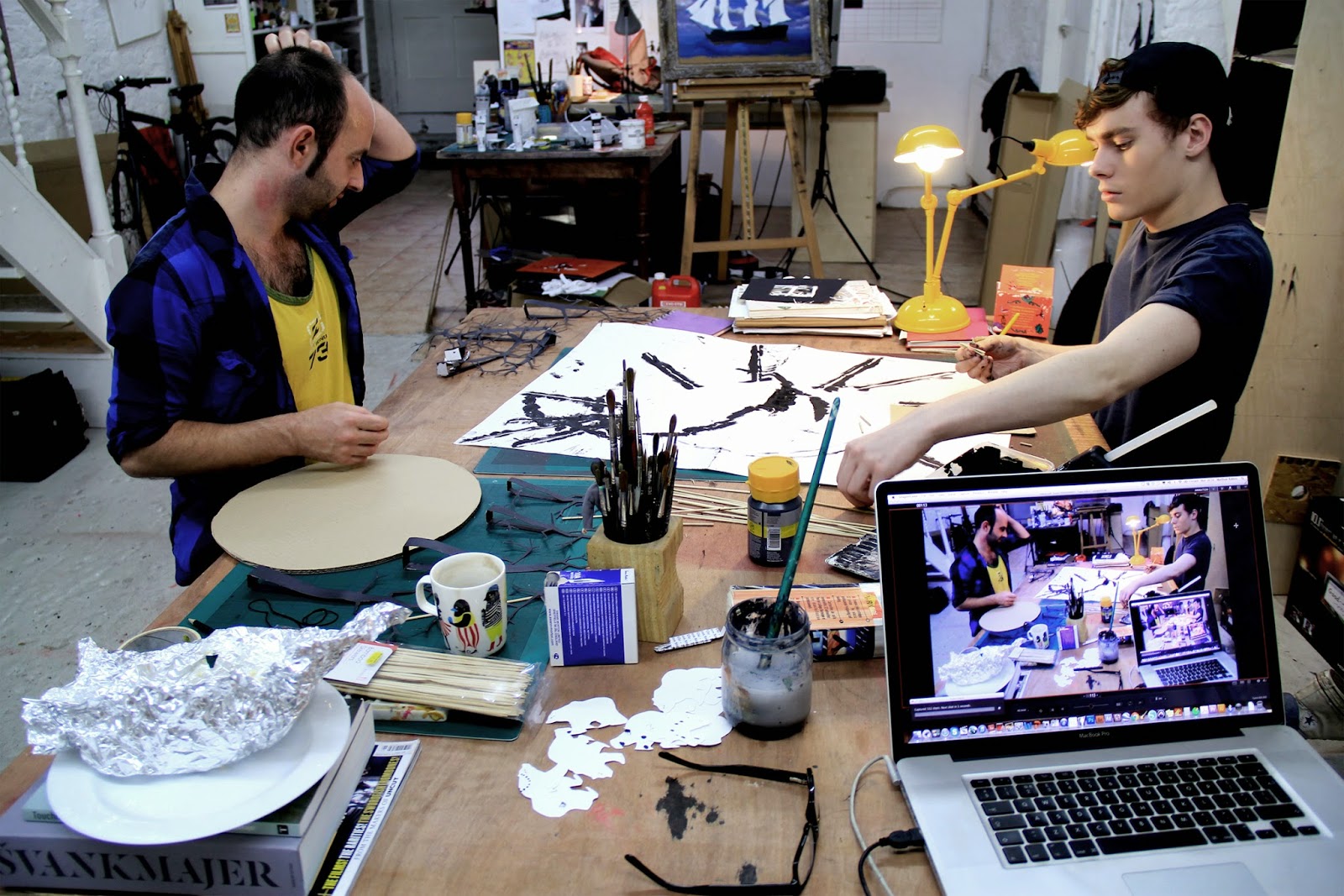 this project has taken up more time than I thought it would so i haven't posted anything for a while . . but the science museum exhibition opens on 25th October!

my other light princess video diaries

here are parts three and four of my Light Princess video diaries:


I didn't make any more after part four . . . I did film myself a little more after this, but a lot of the animation-work we had done got cut because of script changes so I sounded a bit depressed and it wouldn't be much fun to watch me sitting on the roof of the National Theatre in the rain telling you that.  And then I stopped filming the video diaries completely as we kept up with the changes to the work during all the previews . . . it's tricky making animations for live theatre, I guess it would be fun to do again sometime, but it takes up a lot of your energy trying to remain nice.

I filmed myself while I was making the animations, mainly so I had someone to talk to.  Why don't you watch parts one and two here . . .

The Light Princess - designing and animating a scene

The process of making little films for this musical is a bit different to how I normally work, there are more people in the chain that links the first sketches to showing an audience, so I thought I would show you some of the process.  This is a scene that got cut from the show during script re-writes.

This scene is from the prologue, an animated cartoon at the beginning of the show, played on the big screen, like at the cinema, and a voiceover sung by a couple of actors.  The prologue explains the back story and introduces some of the characters.  I know . . you know what a prologue is.  ok - here is my first storyboard for this scene to show my ideas to the director, writer and designer: 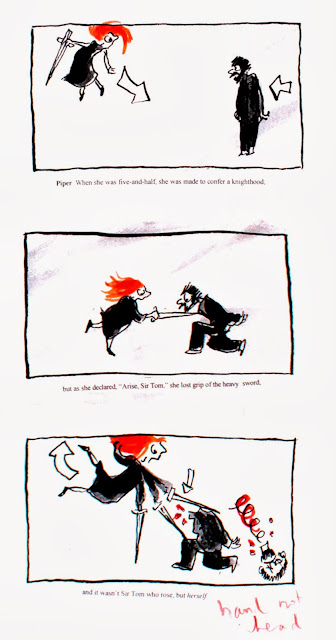 This is Althea (the light princess) attempting to knight someone but losing grip of the sword and floating away (she has no gravity and these scenes were intended to show different variations on that idea).

They liked it but suggested she probably shouldn't be-head someone.  I changed it to his hand, it has to be funny, doesn't it?

I also changed the format to fit within the frame designed by Rae Smith the designer, a slightly more 4:3 shape.  Depending on whether the characters in the prologue are also performed by actors in the live elements of the show affected how I drew them to some extent.  My cut-out versions of the characters would have to look in some way the same as Rae Smith's costume designs.

Sir Tom was just a prologue character so it was up to me to do what I want, and Althea is seen here as a 5 year old girl, so the only design stipulation was to give her red hair.

Althea's father, the King, got added to this scene a little later and he is in the show all the way through so his cut-out version has to refer to the on-stage version.  I like to do this mostly with attitude and one or two strong shapes rather than try to recreate any kind of accurate silhouette.

I have to balance my own animated world feeling cohesive with looking like it is has some place within the world of Rae's stage designs.  We worked a lot with adding block areas of colour and general themes of yellow, round and softer (Lagobel) versus blue spiky and colder / darker (Sealand), or Tintin and Moomins as Rae helpfully described it for me.

The next stage was to animate a test version.

The animations are made mostly from cut out black card - some of the characters are puppets with moving joints, others just have a few replacement parts, the repetition of using small sequences of replacement parts suits the 2D block colour shapes and the low frame rate.

Sir Tom has a walk cycle made of 3 sets of legs: 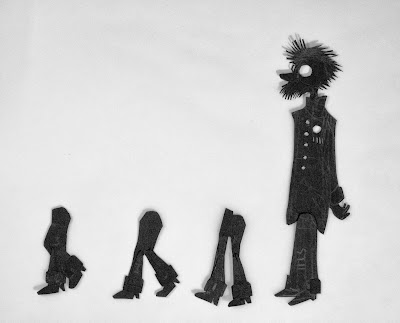 Here you can watch the scene (althea is bald, I hadn't worked out how to do her hair yet):

The next step is to show the director and designer and get a bit of feedback.  Marianne Elliott (the director) suggested we added the King pushing / forcing his daughter on, showing that she is reluctant to take anything seriously (Althea, not Marianne) so every element of the scene is moving the story forward and enforcing the bits that are important for the audience to understand (not just that a floating girl comes and chops a man's hand off).

Each character I animate separately and then we (that is Emma Pile and Lawrence Rowell who worked with me on this) would layer them together to create the finished picture.  We built this into our system to it would be easier to edit and make inevitable timing changes once the show started to develop.

We hadn't quite lined up the king fully here to match Althea's movements (after effects doesn't like my low frame rates), and Althea doesn't have red hair yet, but the scene got cut from the script before we needed to take it any further.

The people walking across the screen are Lagobellans. they live in the kingdom, I used them to wipe on and off between scenes to create transitions that would feel innate and keep the animation alive and moving forward and not use fades or cuts.  If you've seen the show that ideal ALMOST survived the process . . not quite, but enough.

Althea's movement has a few extra pieces to enable all the movements.  Working this way with replacement pieces means you have to think through the characters movement and what they are going to do once they are on screen before you switch on the camera.  There is still room for spontaneity, often a little accidental slip of the puppet can be turned to your advantage  - here I didn't plan to have her sway back and forth with the sword but it just came about as I was animating the scene and I liked it. 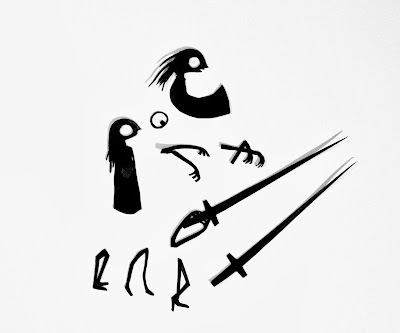 Most of the scenes I just film one take -  although I might loose a bit of accuracy or finesse I think it captures the life a lot better.  I once heard someone talk about having a rock and roll swagger in their work and that appeals to me, although I've used that phrase twice out loud when working with a  director, hoping to explain how my puppets will work and there has been a flash of panic both times.  Or maybe they think I sound pretentious.

it's the last few days now of tightening up the show before it's ready to let me go, I haven't seen any daylight for a few months, creating hand-made stop-motion films for a live theatre show that gets edited and refined daily is hard to keep up with, one small cut or tempo change can easily chop away 2 or 3 weeks of our work here in animation-land.  luckily I am not doing it alone, it's hard to be a one man animation department, that's what Wayne White said when I watched his film for a bit of moral support halfway through this project - beauty is embarrassing - and I have Emma Pile and Lawrence Rowell working with me all hours every day to help with the changes, and they are nice people to be around, it's been fun up here in the dark.

It's hard to deal with your thoughts when something gets cut that you think is good, but then you just have to sit down and come up with more good things to fill the gaps and patch the joins, and then you realise its actually made it better.

Some of you have already been to see it and sent me nice messages. thanks for your support.

Here are a couple of pictures of my work from the prologue . . . oh yeah, my bit is mainly in the first 4 minutes so if you're a latecomer you might wonder what I'm making such a fuss about . . 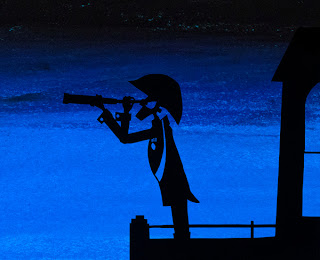 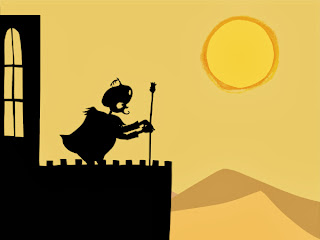 And as there is a big projector onstage to show the animations I've also created a few backdrops . . . here's a palace interior . . . it looks a bit photoshoppy but onstage with lights and smoke and actors it's not bad . . . 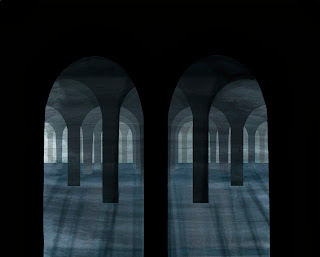 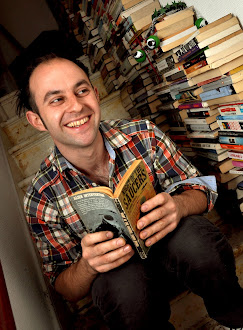 i said this earlier: